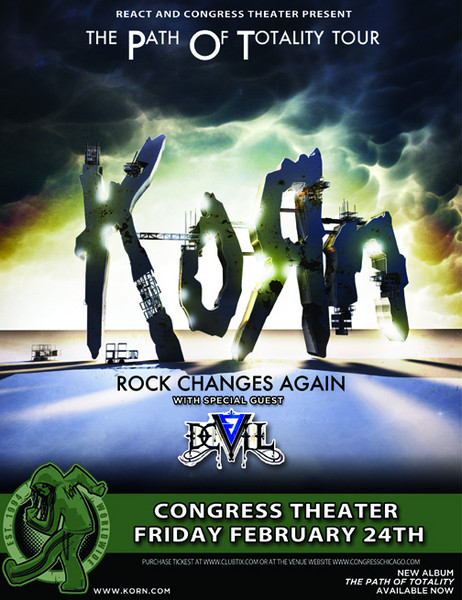 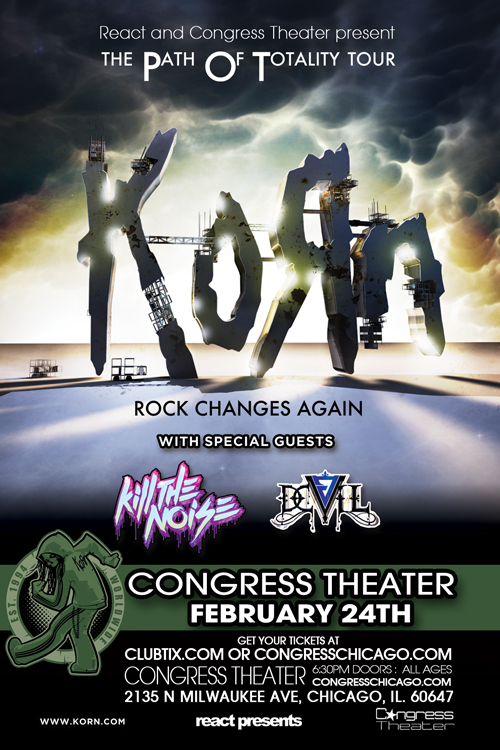 Punkvinyl.com Review
Friday night Korn returned to the Congress Theater after a couple of years away from the city since their last appearance at the Rockstar Mayhem Festival. The band is on the road in support of their new album called, The Path of Totality, which is also the name of this current tour. The venue filled up quickly and soon the place was packed full of eager fans waiting for the band to take the stage. Their wait however would be a couple of hours as there was two opening acts this evening and both were acts you wouldn’t expect to have at Korn show seeing as neither one of them were actually bands.

On the center of the stage there was a table set up that had a laptop computer and some mixers on it. A long-haired guy with black eyes and black teeth calling himself J Devil came out on stage and said something about “playing all his own shit’ and then proceeded to hit play on his laptop and then fiddled with some of the mixers on the table. Upon closer inspection, J Devil was none other than Jonathan Davis of Korn and he apparently has taken a liking to dubstep music as that is what he “performed” for the next thirty minutes. He had a microphone in his hand and would occasionally say things or shout into it and when he wasn’t twiddling knobs, he was jumping and dancing all over the place. It was tiring just watching him and the guy never held still for more than about 10 seconds. When he was done, he thanked the crowd for the warm reception he received and for allowing him to “do what he isn’t supposed to be doing” and left the stage to a fairly large round of applause.

A guy billing himself as Kill the Noise soon followed. He used the same setup at J Devil minus the laptop. He twiddled knobs and shuffled through binders of CDs and played a long, loud dubstep set. The crowd seemed to be familiar with some of the things he was playing and there was plenty of squeals and squelches coming through the sound system as well as bass so loud, so low, and so rumbling that it shook the entire building and likely fractured some bones in the people in the front of the room. Some people danced, some drank, while others violated the smoking laws and chanted “we want Korn”. Anyone not wearing earplugs during this set likely suffered some permanent hearing damage as the set was so ridiculously loud.

After the table was dismantled and Jonathan’s fancy mic stand was attached to the floor, the lights went out and the entire place erupted in a big roar of approval as Korn took the stage. Some black lights were turned on as well and an occasional strobe light and the band started playing, “Predictable”. The crowd wasted little time in started to crowd surf and that kept the security guards up from plenty busy for most of the evening. The band followed it up with “Lies” and an early favorite, “No Place to Hide”. The latter sounding really good and many of the fans were singing along to the choruses. There wasn’t much to see on stage as the band was playing in near darkness aside from black lights and the occasional flashing light.

There was a little video segue that led into a block of new material. The new stuff fuses modern dubstep music with Korn’s traditional sound that results in this entirely new direction for the band that tries to marry two polar opposite styles. While these songs were being played they had some really cool video effects going on the displays that made up the stage and it was pretty hypnotic. Because the stage lighting was so dim or nonexistent, the video images became where your eyes were drawn to while looking at the stage and it felt like a live music video in a dance club more than a rock concert.

Another video segue transitioned into a block of Korn hits and once they got to this portion of their show, the crowd really turned it up a notch. More bodies than ever were being passed along the top of the crowd and the audience sang louder than the band to the choruses of songs like “Here to Stay,” “Freak on a Leash,” and “Falling Away From Me”. The band closed that block with a really great rendition of Pink Floyd’s, “Another Brick in the Wall” which they put a really interesting and slower/heavier spin on and it was one of the highlights of the evening. There was images of white brick walls on their video screen during portions of the song too.

The band came out for a three song encore that started with “Shoots and Ladders (where Jonathan came out on stage playing the bagpipes) that they morphed into a cover of Metallica’s, “One” (sans the slow first half). They followed that up with “Got the Life” and then ended the evening with the best song from their debut album, “Blind”, which as aged nicely and still sounds as good now as it did in 1994 when it was released. When all was said and done the band delivered around 90 minutes of music and the crowd flocked out into the blistering cold all tired and sweaty and seemingly very satisfied.